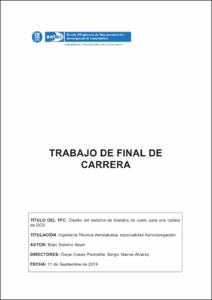 This Project develops the design and implementation of a mechanical and electronic flight controls system, to enable a flight simulation in a real McDonell Douglas DC-9-34 cabin using the real airplane flight controls. At first are shown the objectives and requirements to be achieved with the project implementation. Then it is performed an study of the airplane to know more about the real flight controls operation, which are inoperative for having only the front fuselage section. Being a project with a practical part, the working environment develops in the fuselage, therefore the different workspaces are described. The current airplane condition and flight control mechanical systems are analized before starting design development. The design of the new system is based on two characteristic points for theoretical development. The data acquisition point, corresponding to mechanical part ant the sensor that performs reading of data system, corresponding to electronic part. With the previous analysis of the aircraft, choosing the data acquisition point and sensor type, the final design is developed to use like a roadmap for practice implementation in the airplane. At last describe in detail the implementation process of the new flight control system in the airplane. The movement transmission of cabin flight controls is done with mechanical control cable system, this is the movement data acquisition point of flight controls. Data sensing of cable system movement is done with a potentiometer sensor. Then the output signal of sensors may be transformed and adapted for use in a flight simulation.
SubjectsAirplanes--Control systems, Sistemes de control (Vol)
URIhttp://hdl.handle.net/2117/86251