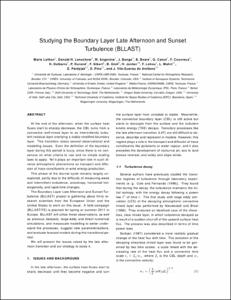 Except where otherwise noted, content on this work is licensed under a Creative Commons license : Attribution-NonCommercial-NoDerivs 3.0 Spain
Abstract
At the end of the afternoon, when the surface heat fluxes start to sharply decrease, the CBL turns from a convective well-mixed layer to an intermittently turbulent residual layer overlying a stably-stratified boundary layer. This transition raises several observational and modelling issues. Even the definition of the boundary layer during this period is fuzzy, since there is no consensus on what criteria to use and no simple scaling laws to apply. Yet it plays an important role in such diverse atmospheric phenomena as transport and diffusion of trace constituents or wind energy production. This phase of the diurnal cycle remains largely unexplored, partly due to the difficulty of measuring weak and intermittent turbulence, anisotropy, horizontal heterogeneity, and rapid time changes. The Boundary Layer Late Afternoon and Sunset Turbulence (BLLAST) project is gathering about thirty research scientists from the European Union and the United States to work on this issue. A field campaign (BLLAST-FE) is planned for spring or summer 2011 in Europe. BLLAST will utilize these observations, as well as previous datasets, large-eddy and direct numerical simulations, and mesoscale modelling to better understand the processes, suggest new parameterisations, and evaluate forecast models during this transitional period. We will present the issues raised by the late afternoon transition and our strategy to study it.
CitationLothon, M. [et al.]. Studying the Boundary Layer Late Afternoon and Sunset Turbulence (BLLAST). A: International Symposium for the Advancement of Boundary Layer Remote Sensing. "15th International Symposium for the Advancement of Boundary Layer Remote Sensing (ISARS 2010)". Paris: 2010, p. 1-4.
URIhttp://hdl.handle.net/2117/8625
Collections
Share: