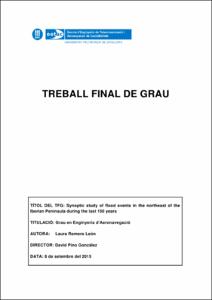 Floods are the main natural hazards affecting the population worldwide. The Western Mediterranean region is one of the areas in risk of suffering these phenomena. In this region, these types of events have lead in many occasions to the destruction of infrastructures and agriculture terrains, and hundreds of human fatalities. A wide research of historical, hydraulical, hydrological and meteorological factors that affected during these events is needed, in order to be able to predict these hazards in the future. We have focused our study in the meteorological reconstruction of these historical floods. By using the 'Prediflood' database we have selected the 23 most catastrophic floods that affected the Northeast of the Iberian Peninsula between 1874 and 2000. Then, the NOAA 6 hourly 20th Century V2 Reanalysis Data Composites have been used in order to analyze the synoptic conditions along each flood and several convective indices of the atmosphere. As a result, after studying these 23 floods, we have found a strong correlation between the stability indices and the season in which the flood occurred. For example the Convective Available Potential Energy (CAPE) usually presents high values during summer episodes, moderate during autumn and low values in winter floods. Regarding the duration of the rainfall, autumn and summer events are usually generated by shorter rainfalls than winter ones. Then, we have focused on studying deeply the synoptic conditions and the temporal evolution of the convective indices for 5 episodes that can be representative of all the rest in terms of stability conditions. Moreover, studying the hydrological data available for these events, there are clear differences between floods which affected mainly the coast and those which affected the Pyrenees. Coastal specific peak flows are larger than the Pyrenean ones, especially for small catchment areas. In addition, we have related meteorological (rainfall duration, CAPE), hydrological (specific peak flow) and geomorphological (catchment area) data to show dependencies between them and between the region (Coast or the Pyrenees) and the season when occurred the flood. Large values of CAPE are usually associated to large specific flows.
SubjectsFloods--Mediterranean Region, Inundacions -- Història