Sprites and elves as proxy of energetic lightning flashes in winter: what can we learn from mesospheric discharges for the protection of wind turbines? 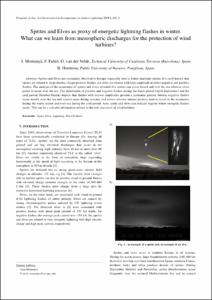 Hermoso, Blas
Document typeConference report
Rights accessOpen Access
Abstract
Sprites and Elves are commonly observed in Europe, especially also in winter maritime storms. It is well known that sprites are related to large electric charge positive flashes and elves are related with high amplitude in either negative and positive flashes. The analysis of the occurrence of sprites and elves revealed that sprites can occur inland and over the sea whereas elves prefer to occur over the sea. The distribution of positive and negative flashes during the warm period (April-September) and the cold period (October-March) depicts that flashes with intense amplitudes present a particular pattern. Intense negative flashes occur mostly over the sea and coastal areas during summer and winter whereas intense positive tend to occur in the mountains during the warm season and over sea during the cold period. Also, sprite and elves can indicate regions where energetic flashes occur. This can be a valuable information related to the risk assesment of wind turbines.
CitationMontaña, J., Fabro, F., Van Der Velde, O., Hermoso, B. Sprites and elves as proxy of energetic lightning flashes in winter: what can we learn from mesospheric discharges for the protection of wind turbines?. A: International Symposium on Winter Lightning. "3rd International Symposium on Winter Lightning: ISWL June 15-16, 2011 Sapporo, Japan". Sapporo: 2011, p. 73-78.
URIhttp://hdl.handle.net/2117/86219
Collections
Share: