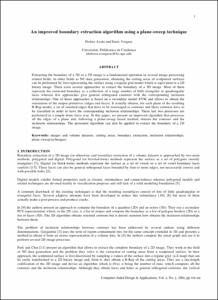 Vergara, Enric
Document typeExternal research report
Rights accessOpen Access
Abstract
Extracting the boundary of a 3D or a 2D image is a fundamental operation in several image processing related fields. In other fields as NC-data generation, obtaining the cutting areas of sculptured surfaces can be performed by first representing the surface using a regular grid model which is equivalent to a 2D binary image. There exist several approaches to extract the boundary of a 3D image. Most of them represent the extracted boundary as a collection of a large number of little triangular or quadrangular faces whereas few approaches give general orthogonal contours with the corresponding inclusion relationships. One of these approaches is based on a secondary model EVM and allows to obtain the orientation of the output primitives (edges and faces). It actually obtains, for each plane of the resulting B-Rep model, a set of oriented edges that have to be rearranged as contours and these contours have to be classified in order to have the corresponding inclusion relationships. These last two processes are performed in a simple brute force way. In this paper, we present an improved algorithm that processes all the edges of a plane and, following a plane-sweep based method, obtains the contours and the inclusion relationships. The presented algorithm can also be applied to extract the boundary of a 2D image.
CitationAyala, D., Vergara, E. "An improved boundary extraction algorithm using a plane-sweep technique". 2006.
Is part ofLSI-06-27-R
URIhttp://hdl.handle.net/2117/86147
Collections
Share: