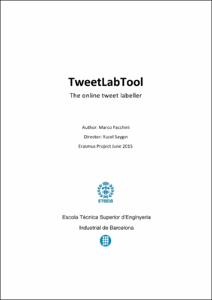 The objective of this project is creating a tool to label tweets. It has to be implemented as a web application so it can be easily accessed through the internet. The tool should allow the user to execute the task in the simplest way as possible. The application needs to work in localhost and in the future may be implemented in a web server. Furthermore the code has to be open source so that further modifications can be done without copyright problems and the most number of people can use it. A manual for the edition of the code is also required. To build the application it has been used Django and Python. The result of the project is TweetLabTool (TLT), a tool able to accomplish the main objectives as well as it integrates some extra features. It has been tested in its localhost version and fulfils perfectly with all the requirements. As this tool is a part of a bigger project where many people are involved, the online version has not been built yet. The main method used to overcome the different difficulties appeared during the development of TLT consist in three steps. Firstly, reading documentation about the topic and the language used in the current step. After writing the code and checking if it works. Thirdly, in case the code does not work debugging it to fix the bugs. It has also been written a manual for editing the code where it is explained the structure and behaviour of each part of the application. It has been elaborated in the most accurate way to ensure that someone without understanding of programming can even edit the code successfully.
SubjectsWeb applications, Aplicacions web, Twitter
URIhttp://hdl.handle.net/2117/86115