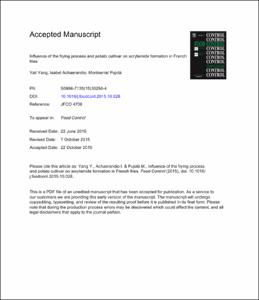 Document typeArticle
Rights accessOpen Access
Abstract
© 2015 Elsevier Ltd. Acrylamide formation during the production of French fries is attributed to Maillard reactions from reducing sugars and asparagine and is dependent on the frying temperature. Low reducing sugars content in potatoes has been recommended to produce fried potato products. However, the influence of the complexity of the potato medium in the chemical reactions that promote the acrylamide formation during deep frying are not well understood. In this study, three potato cultivars (Kennebec, Red Pontiac and Agria) commonly used for fried potato products were evaluated to determine the relationships between the precursors of acrylamide in the fresh potato tubers and the properties of the fried potato strips with the acrylamide content after frying. Frying experiments were conducted at three conditions (time-temperature) to obtain French fries of similar visual colour. Acrylamide formation increased with frying temperature but different behaviour was observed between cultivars. For Red Pontiac, a remarkably increase in acrylamide content was found at 170 °C (~40%) together with the increase in colour. However, lower oil uptake and higher moisture content was obtained as temperature increase. Significant positive correlations were observed between the acrylamide level and the reducing sugars and sucrose content on fresh potatoes (0.652, 0.699, p = 0.01, respectively). The acrylamide content obtained in Agria cultivar may be obtained from the hydrolysis of sucrose during the frying process. In fried potato strips, positive significant correlation was found between the shear force and acrylamide (0.749, p = 0.01). The significant correlations obtained between colour, and texture, colour and oil uptake and texture and acrylamide content indicate the intrinsic relationship between the properties of the fried potato strips and the acrylamide content.
CitationYang, Y., Achaerandio, I., Pujola, M. Influence of the frying process and potato cultivar on acrylamide formation in French fries. "Food control", 01 Abril 2016, vol. 62, p. 216.
URIhttp://hdl.handle.net/2117/86093
DOI10.1016/j.foodcont.2015.10.028
ISSN0956-7135
Collections
Share: