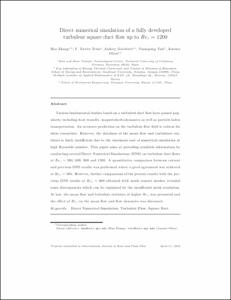 Document typeArticle
Rights accessOpen Access
Abstract
Various fundamental studies based on a turbulent duct flow have gained popularity including heat transfer, magnetohydrodynamics as well as particle-laden transportation. An accurate prediction on the turbulent flow field is critical for these researches. However, the database of the mean flow and turbulence statistics is fairly insufficient due to the enormous cost of numerical simulation at high Reynolds number. This paper aims at providing available information by conducting several Direct Numerical Simulations (DNS) on turbulent duct flows at Re-tau = 300, 600, 900 and 1200. A quantitative comparison between current and previous DNS results was performed where a good agreement was achieved at Re-tau = 300. However, further comparisons of the present results with the previous DNS results at Re-tau = 600 obtained with much coarser meshes revealed some discrepancies which can be explained by the insufficient mesh resolution. At last, the mean flow and turbulent statistics at higher Re-tau was presented and the effect of Re-tau on the mean flow and flow dynamics was discussed.
CitationZhang, H., Trias, F. X., Gorobets, Andrey, Tan, Y., Oliva, A. Direct numerical simulation of a fully developed turbulent square duct flow up to Re-tau=1200. "International journal of heat and fluid flow", 01 Agost 2015, vol. 54, p. 258-267.
URIhttp://hdl.handle.net/2117/86076
DOI10.1016/j.ijheatfluidflow.2015.06.003
ISSN0142-727X
Publisher versionhttp://www.sciencedirect.com/science/article/pii/S0142727X15000685
Collections
Share: