Observation and properties of a sub-cloud bidirectional leader 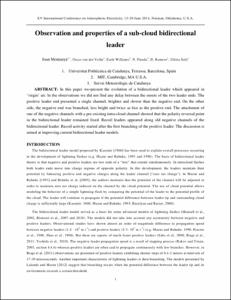 Document typeConference report
Rights accessOpen Access
All rights reserved. This work is protected by the corresponding intellectual and industrial property rights. Without prejudice to any existing legal exemptions, reproduction, distribution, public communication or transformation of this work are prohibited without permission of the copyright holder
ProjectATMOSPHERE SPACE INTERACTIONS MONITOR. FABRICACION DEL MODELO DE VUELO Y RETORNO CIENTIFICO CONTRIBUCION DE LA UPC (MINECO-ESP2013-48032-C5-3-R)
Abstract
In this paper we present the evolution of a bidirectional leader which appeared in ‘virgin’ air. In the observations we did not find any delay between the onsets of the two leader ends. The positive leader end presented a single channel, brighter and slower than the negative end. On the other side, the negative end was branched, less bright and twice as fast as the positive end. The attachment of one of the negative channels with a pre-existing intra-cloud channel showed that the polarity reversal point in the bidirectional leader remained fixed. Recoil leaders appeared along old negative channels of the bidirectional leader. Recoil activity started after the first branching of the positive leader. The discussion is aimed at improving current bidirectional leader models.
CitationMontaña, J., Van Der Velde, O., Williams, E.R., Pineda, N., Romero, D. Observation and properties of a sub-cloud bidirectional leader. A: International Conference on Atmospheric Electricity. "XV International Conference on Atmospheric Electricity, 15-20 June 2014, Norman, Oklahoma, USA". Norman, Oklahoma: 2014, p. 1-6.
URIhttp://hdl.handle.net/2117/86053
Collections
Share: