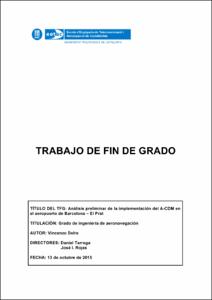 According to the SESAR (Single European Sky ATM Research) project, the most important European airports should implement the A-CDM (Airport Collaborative Decision Making). In this work, I realized a preliminary analysis of the A-CDM implementation in the Barcelona - El Prat airport, using real traffic/operative data kindly offered by Aena (Week 14, 2015). To obtain a quantitative parameterization for this project, I performed an analysis based on the actual capacity of the airport, which is a function of the structure of the airside area, the number of aircrafts operating in the airport and their characteristics. The architecture of the active runways defines a result of 90 operations per hour. Moreover, based on the CDM analysis, I created useful parameters the values and characteristics of which can be used for the A-CDM to understand, quantify and evaluate and the implementation and the benefits of the new system. I quantified the benefits with a double comparative analysis: (i) an analysis based on the global traffic of the airport and (ii) based on timely flights with similar characteristics. Among the several useful results, I underline the improvement of aspects of the EXOT (Estimated Taxi Out Time) assigned to wide body aircrafts, which are the most penalized in the new system. Finally, I estimated the emissions of the traffic and the environmental impact of the A-CDM implementation with a comparative analysis of the week 24 (2014 against 2015), adjusting for the delay due to the airport CDM restrictions. Such estimation indicates the possibility of significant savings of greenhouse gases emissions.
SubjectsAirports--Europe--Planning, Aeroports -- Organització
URIhttp://hdl.handle.net/2117/86038