Towards the calculation of flight inefficiency 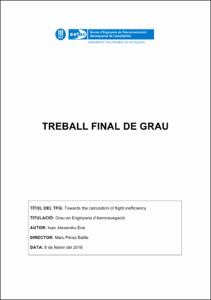 Salvo que se indique lo contrario, los contenidos de esta obra estan sujetos a la licencia de Creative Commons : Reconocimiento-NoComercial-CompartirIgual 3.0 España
Resumen
Air traffic is in continuously increasing, which means that, day by day, its complexity is higher. This fact leads to different consequences, which are analysed along this paper. The immediate impact of these consequences are congestion and delay, which can be caused in any flight phase either on ground or air. In some cases, this delay cannot be recovered but accumulated affecting the airports' capacity and also the airlines management. In this way, the aircraft piloting manner is also altered. It is not an efficient one due to route changes. So, the flight inefficiencies applied to the European airspace network, will be classified, dimensioned and detailed. The main aim of this project is to develop a methodology employed to calculate the flight inefficiency caused by the air traffic complexity. This method is not only developed, but also applied to specific parameters doing an exhaustive study in order to observe its influence. Due to the above expressed reasons, the fuel burn also increases being this the most significant factor. It creates an environmental impact, which is taken into account as a whole world concern. The starting point of the developed work is based on the public data provided by EUROCONTROL and also on the available database of Flight Data Recorders (FDR), which is obtained from another project. Making emphasis on the studied metrics, which can provide a better result of reducing the flight inefficiencies, the fuel consumption will be estimated. It is a complex task related to different points of view like aircraft performance, environmental performance and airlines strategy. In order to promote and validate this analysis, a use case is shared detailing all the factors, which influence the obtained results. This thesis will be also accompanied by an important part dedicated to the further work where some improvements of the current performances can be taken into account.
MateriasFlight, Vol
TitulaciónGRAU EN ENGINYERIA D'AERONAVEGACIÓ (Pla 2010)
URIhttp://hdl.handle.net/2117/86036
Colecciones
Comparte: