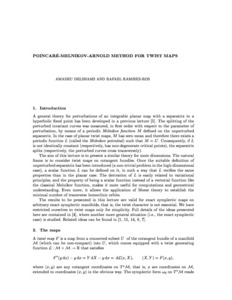 Document typeArticle
Rights accessOpen Access
Abstract
The Poincar\'e--Melnikov--Arnold method is the standard tool for detecting splitting of invariant manifolds for systems of ordinary differential equations close to ``integrable'' ones with associated separatrices. This method gives rise to an integral (continuous sum) known as the Melnikov function (or Melnikov integral). If this function is not identically zero, the separatrices split. Moreover, the non-degenerate zeros of this function are associated to transversal intersections of the perturbed invariant (stable and unstable) manifolds. There exists a similar theory for planar maps, and in this case the Melnikov function is not a continuous sum anymore, but an infinite and (a priori) analytically uncomputable (discrete) sum. In a previous work, we have given a method to compute explicitly this kind of sums in terms of elliptic functions, under hypotheses of meromorphicity over the functions in the sum. This method allows us to obtain a strong non-integrability criterion and to apply it to perturbations of elliptic billiards and integrable standard-like maps like the McMillan map. Explicit estimates of the splitting angles are also given. Our aim is extend this method to the study of the splitting of doubly asymptotic manifolds (separatrices) associated to hyperbolic fixed points of twist maps in arbitrary dimensions. We work with maps generated globally by a generating function. Using the variational principle satisfied by these maps, we associate the non-degenerated critical points of a scalar function (here called Melnikov potential) to the transversal intersections of the perturbed asymptotic manifolds. We want to stress the difference of this point of view with the usual one in the literature, that is based in the study of non-degenerated zeros of a vectorial function. The symplectic structure and the variational principle play a fundamental role in our construction. As a first example where this theory can be applied, we study standard-like perturbations of a $2d$-dimensional twist map given by~R. McLachlan, for $d\ge 2$. This map is a multidimensional generalization of the McMillan map. We prove, among other results, that any entire perturbation destroys the separatrix of the McLachlan map.
URIhttp://hdl.handle.net/2117/860
Collections
Share: