Balloons as a tool for Mars exploration 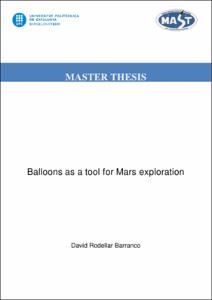 Document typeMaster thesis
Rights accessOpen Access
Abstract
The last Mars exploration missions, such as Curiosity, Opportunity and Spirit by NASA have proved that autonomous vehicles are suited for Mars surface exploration and are becoming an important part of it. These mobile laboratories are designed to navigate autonomously using the information provided by the on-board sensors to find the best path to achieve the desired destination. Considering the limited lifetime of this vehicles, increasing their mobility and improving the information of the terrain around them can help to increase their scientific performance, being the use of balloons capable to lift instruments into the Mars atmosphere one of the possible solutions. Despite satellite images of Mars surface have improved their quality since the arrival to the planet orbit of the Mars Reconnaissance Orbiter with the High Resolution Imaging Science Experiment instrument, the information available is not enough to decide the path of the mobile laboratories and therefore they are equipped with sensors which allows them to compute the optimal path. However, those sensors are limited by the line of view available from their positions, which limit the information they gather usually to the immediate terrain, not allowing a full path optimization, and missing possible interesting spots if they are not in the line of sight. The mobility of the rovers is based on wheels, which can suffer damage due to the terrain they are rolling over or can become stuck as it happened with MER-A, being critical to know the characteristics of the terrain they move over. Even with careful planning, there are zones that being scientifically relevant are unreachable due to the limitations of this type locomotion. This Master thesis will try to study the opportunities that balloons can provide in the Martian exploration, focusing on improving the image acquisition methods to help the navigation and studying the viability of using balloons for other tasks. The main objectives of this work are to study the viability of using balloons on Mars, consider the benefits they will suppose in scientific missions and consider the interaction with other elements as for example a home base or a rover. To fulfill this objectives part of the existing literature on the matter will be reviewed and complemented with additional information, and calculations will be performed to corroborate the viability of balloons usage in Mars atmosphere. Finally, a mission proposal will be drafted to expose part of the possibilities of a balloon mission to Mars.
SubjectsMars--Exploration, Mart (Planeta) -- Exploració
URIhttp://hdl.handle.net/2117/85970
Collections
Share: