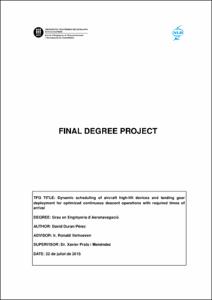 ; Verhoeven, Ronald
CovenanteeTechnische Universiteit Delft
Document typeBachelor thesis
Rights accessOpen Access
Abstract
This report presents a novel implementation of Time and Energy Managed Operations (TEMO) in which the dynamic scheduling of high-lift devices (flaps/slats) and landing gear deployment is used in order to reduce fuel consumption and speed brakes usage while achieving accurate Required Time of Arrivals (RTAs) at the landing runway threshold. Two solutions are proposed: one resolving time and energy deviations with strategic re-planning of the high-lift devices and/or gear deployment; and another one solving energy deviations strategically but nullifying time errors continuously with a tactical aircraft configuration controller. The performance of both implementations has been assessed during this project. Three meteorological scenarios have been considered: International Standard Atmosphere (ISA), real atmosphere without wind prediction errors and real atmosphere including wind errors. 6 different RTAs have been tested for the ISA case while 5 for the other two weather scenarios. All these scenarios have been tested for both mentioned solutions and the baseline case. Moreover, three different "time to next configuration" (0, 30 and 60 seconds) have been simulated both in the tactical and strategic solution leading to a total of 112 different simulations. Results demonstrate that fuel consumption and speed brakes usage are reduced in all the studied weather scenarios when using dynamic scheduling of flaps/slats and landing gear. The tactical solution also shows better time metering during the entire flight descent. Moreover, it has been observed that less unable re-plans are produced and a wider margin of feasible RTAs is obtained with the new implementations. On the other hand, it has been shown that to achieve more accurate RTAs at the runway and increase the stabilization altitude, the performance of the aircraft engines should be better modeled to take into account their dynamics.
SubjectsAirplanes--Landing, Avions -- Tren d'aterratge
DegreeGRAU EN ENGINYERIA D'AERONAVEGACIÓ (Pla 2010)
URIhttp://hdl.handle.net/2117/85955
Collections
Share: