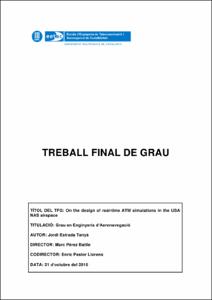 Document typeBachelor thesis
Rights accessOpen Access
Abstract
This document contains the steps followed to obtain data from the American airspace and the process to obtain the files that will allow us to perform simulations with eDEP using data from American airspace. First, we have done a search and we have found information from two reliable sources, the FACET and the National Flight Data Center. In both, we could get the same information, but in the second it was necessary to be registered to have access and the registration process was very long and complex. So, we used data by FACET using a small Java program that allows us to extract it. Once extracted we have created a program that transform the information of airports, sectorization, airways, waypoints and flight plans in a desired format. Then, we have obtained some data which we have seen a number of problems such as wrong waypoint time, wrong speeds and altitudes and flight plans very short. We have tried to implement a kind of solution to all these problems, and finally we have been able to get the files which allows running the simulation on eDEP. Finally, we performed a simulation test with a sectorization that occupy the entire central part of the United States in order to observe the behavior of the maximum number of aircraft. On this simulation, we have seen an important part of the aircrafts moving properly and some others having common mistakes. As final result of this project we have obtained a simulation that a series of modifications are needed on the files of execution in order to achieve the proposed objective.
SubjectsAeronautical instruments, Espai aeri (Dret internacional)
DegreeGRAU EN ENGINYERIA D'AERONAVEGACIÓ (Pla 2010)
Location
1: Flying K Ranch Airport, Independence, KS 67301, Estats Units d'Amèrica
URIhttp://hdl.handle.net/2117/85954
Collections
Share: