Flash heat and flash cold during the 20th Century in Europe 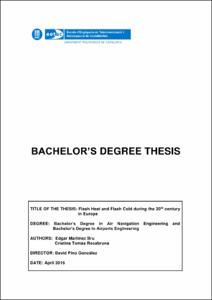 The atmospheric event named Flash Heat was first proposed by Mazon et al., (2014) after analyzing two rapid advection events of extremely warm and dry air which affected Barcelona (Spain) on the 27th August 2010 and Heraklion (Greece) on the 23rd March 2008. The rapid advection led to an increase of the maximum temperature by more than 5ºC in both cities. However, none of the two events could be classified as neither a heat wave nor a heat burst due to a time scale of less than two days (minimum temporal scale for a heat wave) but more than few minutes (temporal scale for a heat burst). This is what motivated the Flash Heat definition. Analogously, the Flash Cold phenomenon was later proposed by Almarza and Cortés (2015). Following the research done by Almarza and Cortés (2015), where the Flash Heat and Flash Cold phenomena along the 20th century in the Iberian peninsula was analyzed, this paper develops their investigation by extending the analysis to southern, central and northern Europe. Thus, the aim of this paper is to study how the Flash Heat and Flash Cold phenomena have distributed over Europe between 1900 and 2000. To develop the research, maximum and minimum daily temperature and precipitation data has been used for a total of 26 different meteorological stations across Europe. The paper includes an analysis based on the evolution of Flash Heat and Flash Cold for each station throughout the last century, a study on its seasonal distribution and an analysis to determine if there is any relationship between the evolution in the number of episodes registered of these phenomena, mean temperature and mean precipitation. Finally, the influence of air masses will be assessed and the distribution of different Flash Heat and Flash Cold types over Europe will be quantified. Once all the data processed and analyzed, the conclusions of the research will be presented and future work on this topic will be proposed.
SubjectsWeather--History, Meteorologia--Catalunya--Història