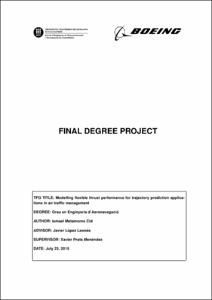 The Air Traffic Management (ATM) paradigm is shifting towards a scenario where Trajectory Predictors (TP) play a key role. They rely on Aircraft Performance Models (APM), mathematical models of the performance related characteristics of aircraft. The widespread use of non-coventional take-off procedures, such as the flexible thrust method, has arose the necessity of modelling them to keep fidelity in take-off trajectory predictions. This project, carried out with Boeing Research & Technology Europe (BR&TE) and upon request of EUROCONROL, arises in response to the current lack in the APM market of a validated methodology to model reduced thrust operations. Its goal is to propose a complete and validated model to compute reduced thrust using Assumed Temperature (AT). The proposed methodology is composed by a model of AT and a thrust model properly validated for flexible thrust computations. To accomplish this goal, a new specification of the AT model that is being developed by BR&TE has been implemented, based upon a set of improvements suggested by EUROCONTROL. In order to determine a valid thrust model for flexible thrust computations, EUROCONTROL'S Base of Aricraft Data (BADA) and Aircraft Noise Performance (ANP) APMs have been validated. These validations have been carried out with different official Boeing's performance software: the Standard Take-off Analysis Software (STAS) and the Boeing Climbout Program (BCOP). As a result of the study different order polynomials that model the AT as a function of the take-off conditions have been produced. In addition, it has been concluded that ANP contains a valid thrust model for flexible thrust calculations, whereas the current version of BADA is not valid to compute thrust during the take-off phase. A first application of this method has been put into effect by developing a prototype of a Take-off Trajectory Predictor (TTP) that implements the flexible thrust model. This prototype is intended to be integrated in Boeing's trajectory computation infrastructure in the future as a take-off and landing module and needs to be improved, validated with Boeing's performance software and integrated as future work.
SubjectsAir traffic control--Management, Trànsit aeri--Control
URIhttp://hdl.handle.net/2117/85938