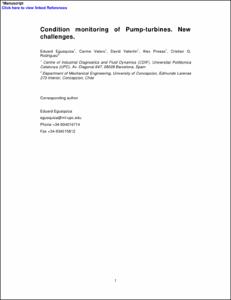 Rodriguez Godoy, Cristian
Document typeArticle
Rights accessOpen Access
ProjectANALISIS DE LA INTERACCION FLUIDO-ESTRUCTURA EN PERFILES HIDRAULICOS DE BAJA VORTICIDAD Y SU EFECTO EN LA RESPUESTA DINAMICA DE TURBINAS-BOMBA (MINECO-DPI2012-36264)
Abstract
At present, pumped storage is the only system to store huge amounts of energy. The surplus of energy in the electrical grid is used for pumping water from a lower to a higher reservoir (pump operation). At peak hours or in case of emergency this water goes down generating electrical energy (turbine operation). In the last years, due to the massive entrance of wind power, the number of start and stop cycles have increased dramatically as well as the operation at very low loads. In this new scenario more cases of damage have been reported and an effective vibration monitoring is necessary. Reversible pump-turbines (RPT) are high performance machines that have to change operation from pump to turbine mode (reversing runner rotation and flow direction) in a short time. Due to their special design characteristics (large power concentration) and operating conditions, they generate large pressure pulsations and forces when in operation. In this paper the vibration monitoring of large RPT units have been analysed. The results obtained after 15 years of monitoring several power plants with this type of machines have been used for the analysis. In the last years, most of the supervised power plants have been monitored on-line remotely. First the monitoring system used is described. The main types of excitation forces expected during the operation of these machines are studied especially the most characteristic and distinctive that are the pressure pulsations due to the rotor/stator interaction. The vibration signatures measured in machines with different designs are analysed in detail and compared with the signatures of conventional turbines. The influence of the operation type (as a pump and or as a turbine) and on the power delivered has been studied and the changes of the signatures presented. After the analysis of the vibration signatures the procedure used for the selection of spectral bands is explained. The analysis of the results obtained with the monitoring is shown. First the evolution of overall levels and the comparison with vibration Standards is discussed. Second the main types of damage found are introduced. Damage in the generator, in bearings, in supporting structure and abnormal operation with cavitation are shown. The changes in vibration signatures and spectral bands for these types of damage are also given. Finally the specific case of damage in runners is introduced.
CitationEgusquiza, E., Valero, M., Valentin, D., Presas, A., Rodriguez, C. Condition monitoring of pump-turbines. New challenges. "Measurement", Maig 2015, vol. 67, p. 151-163.
URIhttp://hdl.handle.net/2117/85937
DOI10.1016/j.measurement.2015.01.004
ISSN0263-2241
Collections
Share: