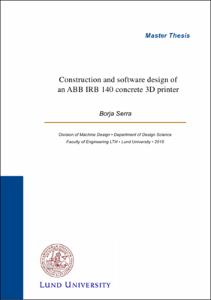 The project consists in the design of a concrete 3D printer that would originally be used for manufacturing street furniture. It is divided into two main parts which are the frame and software design. The structure where the robot is attached to has to follow some requirements to make it as flexible as possible. Transportation and stiffness are probably the most important facts to take into account in the design as long as the printing area is also satisfied. The solution found is to design a frame made out of aluminum extrusion that is light, stiff and compact enough to be able to be moved and print without any preparation required. Regarding the software, it has been developed using the well known program MATLAB. In this platform a few steps have been followed to process STL1 files and generate the RAPID code used on ABB Robotstudio. Once the STL files have been read and their data has been stored a slicing algorithm divides the CAD2 design into many layers. Then all solid areas of the drawing are identified and an algorithm starts analyzing the Hamiltonian paths/cycles on every layer. Finally, the data collected is translated in RAPID and stored into a TXT file. An additional DOF3 has also been added to increase the printing volume. It is a linear motion device which moves the robot along the x axis. The idea is that the control is done with a micro controller unit that interacts with the robot’s cabinet to indicate how far the robot platform should move. This new device would be called when the software detects the robot is reaching a singular point (a joint out of range).
SubjectsThree-dimensional printing, Computer printers -- Design, Impressió tridimensional, Impressores (Ordinadors) -- Disseny
ProvenanceAquest document conté originàriament altre material i/o programari no inclòs en aquest lloc web
URIhttp://hdl.handle.net/2117/85925