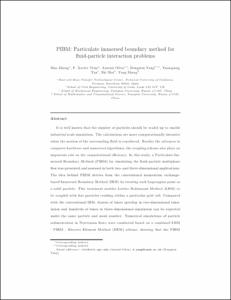 Yang, Dongmin
Tan, Yuanqiang
Shu, Shi
Sheng, Yong
Document typeArticle
Rights accessOpen Access
Abstract
It is well known that the number of particles should be scaled up to enable industrial scale simulation. The calculations are more computationally intensive when the motion of the surrounding fluid is considered. Besides the advances in computer hardware and numerical algorithms, the coupling scheme also plays an important role on the computational efficiency. In this study, a particulate immersed boundary method (PIBM) for simulating the fluid-particle multiphase flow was presented and assessed in both two- and three-dimensional applications. The idea behind PIBM derives from the conventional momentum exchange-based Immersed Boundary Method (IBM) by treating each Lagrangian point as a solid particle. This treatment enables Lattice Boltzmann Method (LBM) to be coupled with fine particles residing within a particular grid cell. Compared with the conventional IBM, dozens of times speedup in two-dimensional simulation and hundreds of times in three-dimensional simulation can be expected under the same particle and mesh number. Numerical simulations of particle sedimentation in Newtonian flows were canducted based on a combined LBM-PIBM-Discrete Element Method (DEM) scheme, showing that the PIBM can capture the feature of particulate flows in fluid and is indeed a promising scheme for the solution of the fluid-particle interaction problems.
CitationZhang, H., Trias, F. X., Oliva, A., Yang, D., Tan, Y., Shu, S., Sheng, Y. PIBM: Particulate immersed boundary method for fluid-particle interaction problems. "Powder technology", 01 Març 2015, vol. 272, p. 1-13.
URIhttp://hdl.handle.net/2117/85915
DOI10.1016/j.powtec.2014.11.025
ISSN0032-5910
Publisher versionhttp://www.sciencedirect.com/science/article/pii/S0032591014009358
Collections
Share: