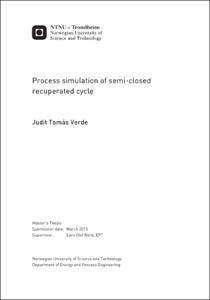 Show full item record
Tomás Verde, Judit
Tutor / director / evaluatorOlof Nord, Lars
Document typeMaster thesis
Rights accessOpen Access
Abstract
Nowadays, the combined cycle gas turbine (CCGT) is the most used technology for electric power generation among the plants that produce electricity from fossil fuels. There are several advantages that made the widespread of this technology. The most important benefits in comparison with conventional thermoelectric plants are a higher efficiency, its flexibility, and acceptable NOx and CO2 emissions. However, in recent years, a power cycle has been suggested as a new choice outperforming the widely used CCGT plants. The most recent proposal is an air breathing semi-closed recuperated cycle (SCRC) which, although it has been proposed since the 1980s, has not been yet practically developed. Such plants have an efficiency potential similar to CCGTs. Flexibility operation, power density, its simplicity, and an increased power density could be advantages over the CCGT plants as well as being well suited for CO2 capture. Furthermore, a SCRC does not require any inexistent technology that has not been proved before in large CCGTs or gas turbine plants (GT). Hence, a comparison between a CCGT plant and the innovative SCRC technology has been developed in this project. For achieving this objective, a SCRC was designed on the basis of recent studies, and a CCGT was based on theory and operating plants. The simulations of these models were carried out using EBSILON®Professional. After comparing both thermodynamic cycles and seeing the advantages and inconveniences of the semi-closed cycle studied, a sensitivity analysis of the SCRC was developed in order to know how determined changes in the design point influenced on the plant. To conclude this project, the most relevant aspects regarding potential, future work, and challenges with the SCRC technology were listed.
SubjectsElectric power production, Thermodynamics, Combined cycle power plants, Energia elèctrica -- Producció, Termodinàmica, Centrals d'energia de cicle combinat
ProvenanceAquest document conté originàriament altre material i/o programari no inclòs en aquest lloc web
URIhttp://hdl.handle.net/2117/85842
Collections
Share: