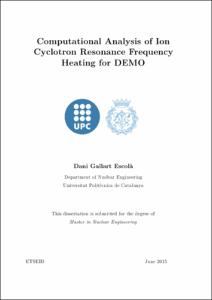 Document typeMaster thesis
Rights accessOpen Access
Abstract
Ion cyclotron resonance frequency heating (ICRH) is one of the most important mechanisms to heat fusion plasma. The magnetic field generated by the magnetic coils forces ions to follow a cyclotron trajectory around the magnetic field lines due to the Lorentz force. Therefore, ions revolve around the magnetic field lines in a determined frequency, the so called ion cyclotron frequency. ICRH is based on launching electromagnetic waves from the low-field side in such a way that their frequency matches the one from ions cyclotron frequency. When both frequencies match, another effect begins to occur, the wave-particle interaction. At this point, ions start damping the wave by absorbing its energy. This effect modifies the distribution function of ions which develops a tail in the high energy region. The fast ions produced by the energy absorption from the electromagnetic waves play an important role in heating the bulk plasma. Therefore, it is crucial to know how the energy of the wave is distributed among ions and electrons, and how the fast ions produced deliver their energy to the other particles, ions and electrons. This Msc thesis is a first computational assessment of bulk plasma heating for DEMO. The DEMOnstration power plant is a proposed nuclear fusion power plant that is expected to be built after the experimental reactor ITER. It will be the first fusion reactor to produce electrical energy. Its parameters and scope are still not fixed yet, a few different yet similar designs exist. However, the physical dimensions and energy output in DEMO are much bigger than that of ITER. In fact, DEMO’s 2 to 4 gigawatts of fusion power will be in the scale of the modern electric power plants. In this sense, the analysis here presented, takes into account the evolution of the fast ions and assesses their behavior at DEMO. The ICRH scenarios studied are the second harmonic tritium with and without 3He in D-T plasma as they are regarded as the most promising ICRH scenarios. Plasma parameters, as temperature T and electron density ne, are scanned in order to obtain the behavior of the fast ions. A DEMO design point which has been used to perform deeper analysis for a determined case has been established at T = 30 keV , ne = 1.2 · 1020 m−3. The analysis has been carried out using the PION code. PION has been extensively benchmarked against JET results. It is able to solve the evolution in time of the distribution function and to compute the absorption of the electromagnetic wave. This problem must be solved self-consistently. PION simulations consist in a number of time steps. First of all, for each time step, the power absorbed is calculated. This information is then used for computing the distribution function with a Fokker-Planck model, which will be used to compute the absorption power at the beginning of the next time step. This process is repeated iteratively until convergence is reached. The results obtained in this work are two: i) the bulk ion heating and ii) fast ion parameters. We have noticed that by placing the resonance region slightly closer to the outer side the bulk ion heating is improved in both scenarios by reducing the direct electron damping. The values for bulk ion heating of a 100 MW electromagnetic wave launch are 55.84 MW for a plasma with 3% of 3He and 43.00 MW for a plasma without 3He. The plasma without the 3He dilution shows a higher reaction rate and also its fast ions are considerably more energetic. So, as the minority heating scenario has an enhanced bulk ion heating, the second harmonic tritium scenario presents two advantages, firstly that no 3He is required and secondly that there is no 3He dilution.
SubjectsElectron cyclotron resonance sources, Cyclotrons, Ions, Fonts de ressonància ciclotrònica electrònica, Ciclotrons, Ions
DegreeMÀSTER UNIVERSITARI EN ENGINYERIA NUCLEAR (Pla 2012)
URIhttp://hdl.handle.net/2117/85835
Collections
Share: