Design and integration of the electronic parts of a suborbital payload 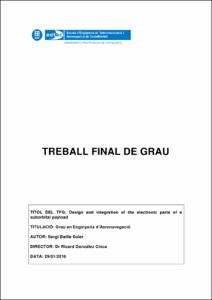 Except where otherwise noted, content on this work is licensed under a Creative Commons license : Attribution-NonCommercial-NoDerivs 3.0 Spain
Abstract
This work is part of an experimental project carried out at the Departament de Física Aplicada of the Universitat Politècnica de Catalunya (UPC) by a five student-team at the Microgravity Laboratory in Escola d'Enginyeria en Telecomunicacions i Aeroespacials de Castelldefels (EETAC) with the aim of going one step further in the studies of the interaction between bubbles and ultrasound following the previous work developed at the UPC Microgravity Laboratory. The goal of the experiment is to study the interaction between an acoustic fields and the boiling phenomena to enhance heat transfer and mass transfer in microgravity conditions on a REXUS sounding rocket. Access to this platform was granted by the European Space Agency. The complexity of the experiment presents a large number of tasks in different aspects such as mechanics, electronics, software or the assembly of the experiment. This document is focused on a part of the electronics design, and mainly, the control software programming by means of LabView from National Instruments.
SubjectsLabVIEW, Labview (Programes d'ordinador)
DegreeGRAU EN ENGINYERIA D'AERONAVEGACIÓ (Pla 2010)
URIhttp://hdl.handle.net/2117/85786
Collections
Share: