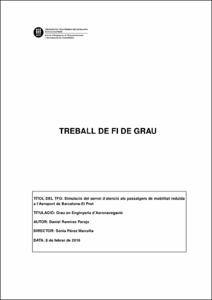 Document typeBachelor thesis
Rights accessOpen Access
Abstract
This Bachelor thesis presents the development of a specific program to be used at the Barcelona-El Prat Airport, in order to simulate the service to passengers with reduced mobility, in order to be able to find a proper staff distribution. This program is necessary because of the big levels of uncertainty of the service, due to the fact that a lot of users do not alert the Airport that they are going to use it. Thus, the main aim of the program is to simulate the total amount of passengers with reduced mobility that is going to request service during a specific season, and a given terminal, weekday and slot; and also to assign the adequate staff in order to accomplish the demands of the European Union to that service. Moreover, the program has to be able to predict, using a percentage of growth, the total amount of requests that the system must face in the following years, using the data obtained in the previous year. In order to be able to do the program, the requests data of the service during the years 2013, 2014 and 2015 have been used. Another study of this service has been used in order to know the time probability distributions service of each stand in the airport, both arrivals and departures. It is important to point out, that this study only give us the 2013 distributions, so, it is important to take it into account, and, if there is the intention to use it in the following years, it must be assumed that this distributions stay constant. Once we have analysed the technical aspects of the program, the obtained results for 2013 are shown. For each weekday, terminal and season, there is a table divided into four slots, corresponding to interval times of 4 or 8 hours, where the mean number of PRM who use the system after 100 iterations can be found, as well as the mean waiting time, the required servers and the non-idle time percentage of each server. These tables are also divided into two parts, the first one shows the results obtained when the 95\% of the users are attended in less time than the most restrictive ones given by the EU, and another one, where the results show the data obtained when the 99\% of the users are attended. To sum up, we can see that, comparing the results obtained using the simulations and the real data of the service, the program works as it is supposed to. That is because the values obtained of users of the service is really close to the real values, as well as the number of servers obtained, which corresponds to the values obtained in the 95\% simulation.
SubjectsAirports--Customer services, Aeroports -- Catalunya -- Barcelona
DegreeGRAU EN ENGINYERIA D'AERONAVEGACIÓ (Pla 2010)
URIhttp://hdl.handle.net/2117/85779
Collections
Share: