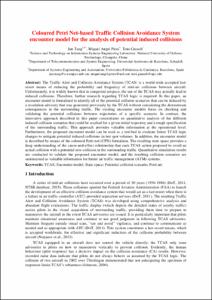 The Traffic Alert and Collision Avoidance System (TCAS) is a world-wide accepted lastresort means of reducing the probability and frequency of mid-air collisions between aircraft. Unfortunately, it is widely known that in congested airspace, the use of the TCAS may actually lead to induced collisions. Therefore, further research regarding TCAS logic is required. In this paper, an encounter model is formalised to identify all of the potential collision scenarios that can be induced by a resolution advisory that was generated previously by the TCAS without considering the downstream consequences in the surrounding traffic. The existing encounter models focus on checking and validating the potential collisions between trajectories of a specific scenario. In contrast, the innovative approach described in this paper concentrates on quantitative analysis of the different induced collision scenarios that could be reached for a given initial trajectory and a rough specification of the surrounding traffic. This approach provides valuable information at the operational level. Furthermore, the proposed encounter model can be used as a test-bed to evaluate future TCAS logic changes to mitigate potential induced collisions in hot spot volumes. In addition, the encounter model is described by means of the coloured Petri net (CPN) formalism. The resulting state space provides a deep understanding of the cause-and-effect relationship that each TCAS action proposed to avoid an actual collision with a potential new collision in the surrounding traffic. Quantitative simulation results are conducted to validate the proposed encounter model, and the resulting collision scenarios are summarised as valuable information for future Air Traffic Management (ATM) systems.
CitationTang, J., Piera, M.A., Guasch, A. Coloured Petri net-based traffic collision avoidance system encounter model for the analysis of potential induced collisions. "Transportation research. Part C, emerging technologies", 03 Març 2016, núm. 67, p. 357-377.
URIhttp://hdl.handle.net/2117/85742
DOI10.1016/j.trc.2016.03.001
ISSN0968-090X