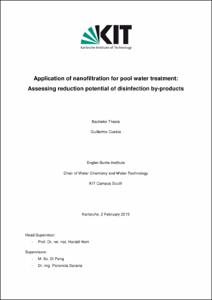 Except where otherwise noted, content on this work is licensed under a Creative Commons license : Attribution-NonCommercial-NoDerivs 3.0 Spain
Abstract
Disinfection of water is mandatory for swimming pools. Most of them use Chlorine or its derivates for that purpose. When entering the pool bathers bring substances such as sweat, hairs and cosmetics that react with disinfectants and form disinfection by-products (DBPs) which are known to be harmful for human health. In order to avoid the formation of these undesirable products new technologies for pool water treatment must be developed or alternatively a control system of the DBPs in the pool. The most important DBPs and their precursors are organic. Nanofiltration (NF) comes up as a possible solution for the problem as it is capable of rejecting organic matter. A nanofiltration filtration plant was installed in an indoor pool in Germany. The existed pool water treatment included flocculation, powdered activated carbon adsorption and ultrafiltration. During this study a branch current was treated by the new NF plant. The nanofiltration plant treated 0.3% of the global recycle flow, meaning approximately 9.7m3/day. During 110 days the of dissolved organic carbon (DOC), trihalomethanes (THM), adsorbable organic halogens (AOX), Ions, UV-absorbance, electrical conductivity and pH were measured every day from different key positions of the water treatment process. This intensive analysis of the effects and behaviour of the nanofiltration plant in a real scale application and its subsequent interpretation were carried out and the obtained information can be relevant for future applications in swimming pool water treatment. The rejection of DOC by the membrane has been shown to be 84% ± 4% while THM and AOX were 70% ± 11% and 95% ± 2% respectively. Ion rejection ranged from 57% to 99% depending on charge and size. THM and AOX formation potentials before and after nanofiltration were also evaluated, showing a significant decrease in 78% and 93% respectively. Umu-tests were also carried out in order to assess possible genotoxicity effects of the pool water. All results obtained were negative in genotoxicity. Despite of the high rejections shown by nanofiltration no significant decrease of THM concentration in pool water was achieved. THM showed a positive correlation with DOC with time delay and high variability in its concentrations. AOX showed an increase after the activated carbon shutdown. But compared to previous research AOX was also reduced in a 49% by NF. During the study the membrane presented an increasing flow decline. By the end of the investigation losses of 17.5% from the initial permeate flow were observed. Nanofiltration has shown its potential as a suitable pool water treatment process. Later studies should further investigate the operational settings needed in order to provide further improvement of water quality, the development of more fouling and chemical resistant membranes and more suitable cleaning strategies.
SubjectsSwimming pools -- Maintenance and repair, Water -- Purification, Nanofiltration, Piscines -- Manteniment i reparació, Aigua -- Depuració, Nanofiltració
ProvenanceAquest document conté originàriament altre material i/o programari no inclòs en aquest lloc web
DegreeGRAU EN ENGINYERIA QUÍMICA (Pla 2010)
URIhttp://hdl.handle.net/2117/85714
Collections
Share: