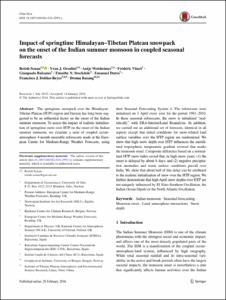 Basang, Droma
Document typeArticle
PublisherSpringer
Rights accessOpen Access
European Commission's projectSPECS - Seasonal-to-decadal climate Prediction for the improvement of EuropeanClimate Services (EC-FP7-308378)
Abstract
The springtime snowpack over the Himalayan–Tibetan Plateau (HTP) region and Eurasia has long been suggested to be an influential factor on the onset of the Indian summer monsoon. To assess the impact of realistic initialization of springtime snow over HTP on the onset of the Indian summer monsoon, we examine a suite of coupled ocean–atmosphere 4-month ensemble reforecasts made at the European Centre for Medium-Range Weather Forecasts, using their Seasonal Forecasting System 4. The reforecasts were initialized on 1 April every year for the period 1981–2010. In these seasonal reforecasts, the snow is initialized “realistically” with ERA-Interim/Land Reanalysis. In addition, we carried out an additional set of forecasts, identical in all aspects except that initial conditions for snow-related land surface variables over the HTP region are randomized. We show that high snow depth over HTP influences the meridional tropospheric temperature gradient reversal that marks the monsoon onset. Composite difference based on a normalized HTP snow index reveal that, in high snow years, (1) the onset is delayed by about 8 days, and (2) negative precipitation anomalies and warm surface conditions prevail over India. We show that about half of this delay can be attributed to the realistic initialization of snow over the HTP region. We further demonstrate that high April snow depths over HTP are not uniquely influenced by El Nino-Southern Oscillation, the Indian Ocean Dipole or the North Atlantic Oscillation.
CitationSenan, Retish [et al.]. Impact of springtime Himalayan-Tibetan Plateau snowpack on the onset of the Indian summer monsoon in coupled seasonal forecasts. "Climate Dynamics", 20 Febrer 2016, p. 1-17.
URIhttp://hdl.handle.net/2117/85697
DOI10.1007/s00382-016-2993-y
ISSN0930-7575
Publisher versionhttp://link.springer.com/article/10.1007%2Fs00382-016-2993-y
Collections
Share: