Individual-based modeling of tuberculosis in a user-friendly interface: Understanding the epidemiological role of population heterogeneity in a city 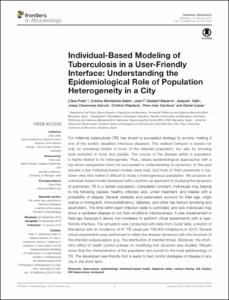 Except where otherwise noted, content on this work is licensed under a Creative Commons license : Attribution-NonCommercial-NoDerivs 3.0 Spain
Abstract
© 2016 Prats, Montañola-Sales, Gilabert-Navarro, Valls, Casanovas-Garcia, Vilaplana, Cardona and López. For millennia tuberculosis (TB) has shown a successful strategy to survive, making it one of the world's deadliest infectious diseases. This resilient behavior is based not only on remaining hidden in most of the infected population, but also by showing slow evolution in most sick people. The course of the disease within a population is highly related to its heterogeneity. Thus, classic epidemiological approaches with a top-down perspective have not succeeded in understanding its dynamics. In the past decade a few individual-based models were built, but most of them preserved a top-down view that makes it difficult to study a heterogeneous population. We propose an individual-based model developed with a bottom-up approach to studying the dynamics of pulmonary TB in a certain population, considered constant. Individuals may belong to the following classes: Healthy, infected, sick, under treatment, and treated with a probability of relapse. Several variables and parameters account for their age, origin (native or immigrant), immunodeficiency, diabetes, and other risk factors (smoking and alcoholism). The time within each infection state is controlled, and sick individuals may show a cavitated disease or not that conditions infectiousness. It was implemented in NetLogo because it allows non-modelers to perform virtual experiments with a user-friendly interface. The simulation was conducted with data from Ciutat Vella, a district of Barcelona with an incidence of 67 TB cases per 100,000 inhabitants in 2013. Several virtual experiments were performed to relate the disease dynamics with the structure of the infected subpopulation (e.g., the distribution of infected times). Moreover, the short-term effect of health control policies on modifying that structure was studied. Results show that the characteristics of the population are crucial for the local epidemiology of TB. The developed user-friendly tool is ready to test control strategies of disease in any city in the short-term.
CitationPrats, C., Montañola-Sales, C., Gilabert, JF, Valls, J., Casanovas, J., Vilaplana, C., Cardona, P.J., Lopez, D. Individual-based modeling of tuberculosis in a user-friendly interface: Understanding the epidemiological role of population heterogeneity in a city. "Frontiers in Microbiology", 01 Gener 2016, vol. 6:1564.
URIhttp://hdl.handle.net/2117/85615
DOI10.3389/fmicb.2015.01564
ISSN1664-302X
Publisher versionhttp://journal.frontiersin.org/article/10.3389/fmicb.2015.01564/full?utm_source=Email_to_authors_&utm_medium=Email&utm_content=T1_11.5e1_author&utm_campaign=Email_publication&field=&journalName=Frontiers_in_Microbiology&id=169695
Collections
Share: