Is the central binary system of the planetary nebula Henize 2-428 a type Ia supernova progenitor? 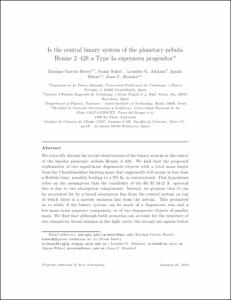 Except where otherwise noted, content on this work is licensed under a Creative Commons license : Attribution-NonCommercial-NoDerivs 3.0 Spain
Abstract
We critically discuss the recent observations of the binary system at the center of the bipolar planetary nebula Henize 2-428. We find that the proposed explanation of two equal-mass degenerate objects with a total mass larger than the Chandrasekhar limiting mass that supposedly will merge in less than a Hubble time, possibly leading to a SN Ia, is controversial. This hypothesis relies on the assumption that the variability of the He II 5412 Å spectral line is due to two absorption components. Instead, we propose that it can be accounted for by a broad absorption line from the central system on top of which there is a narrow emission line from the nebula. This prompted us to study if the binary system can be made of a degenerate star and a low-mass main sequence companion, or of two degenerate objects of smaller mass. We find that although both scenarios can account for the existence of two symmetric broad minima in the light curve, the second one agrees better with observations. We thus argue that the claim that Henize 2-428 provides observational evidence supporting the double-degenerate scenario for SN Ia is premature.
CitationGarcia-berro, E., Soker, N., Althaus, L. G., Ribas, I., Morales, J. Is the central binary system of the planetary nebula Henize 2-428 a type Ia supernova progenitor?. "New astronomy", 01 Maig 2016, vol. 45, p. 7.
URIhttp://hdl.handle.net/2117/85609
DOI10.1016/j.newast.2015.10.010
ISSN1384-1076
Collections
Share: