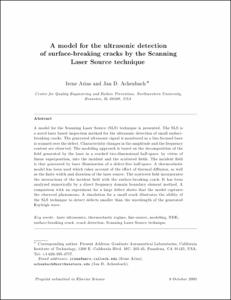 Achenbach, J. D.
Document typeArticle
Rights accessOpen Access
Abstract
A model for the scanning laser source (SLS) technique is presented. The SLS is a novel laser-based inspection method for the ultrasonic detection of small surface-breaking cracks. The generated ultrasonic signal is monitored as a line-focused laser is scanned over the defect. Characteristic changes in the amplitude and the frequency content are observed. The modeling approach is based on the decomposition of the field generated by the laser in a cracked two-dimensional half-space, by virtue of linear superposition, into the incident and the scattered fields. The incident field is that generated by laser illumination of a defect-free half-space. A thermoelastic model has been used which takes account of the effect of thermal diffusion, as well as the finite width and duration of the laser source. The scattered field incorporates the interactions of the incident field with the surface-breaking crack. It has been analyzed numerically by a direct frequency domain boundary element method. A comparison with an experiment for a large defect shows that the model captures the observed phenomena. A simulation for a small crack illustrates the ability of the SLS technique to detect defects smaller than the wavelength of the generated Rayleigh wave.
CitationArias, I.; Achenbach, J. A model for the ultrasonic detection of surface-breaking cracks by the scanning laser source technique. "Wave motion", Gener 2004, vol. 39, núm. 1, p. 61-75.
URIhttp://hdl.handle.net/2117/8558
DOI10.1016/j.wavemoti.2003.06.001
ISSN0165-2125
Collections
Share: