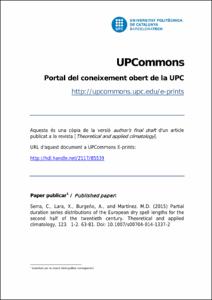 Document typeArticle
Rights accessOpen Access
Abstract
A spatial analysis of partial duration series, PDS, of the dry spell lengths, DSL, is applied to 267 European stations during years 1951–2000. A DSL is defined as the number of consecutive days with precipitation below 0.1 mm/day. For every station, PDS are made of DSL longer than those corresponding to 95th empirical percentile. The L-skewness and L-kurtosis diagram of the PDS distributions shows that most of the stations fit well a generalised Pareto, GP, model. Only four rain gauge records at the southeast Mediterranean coast notably depart from this model. In addition, DSL maps for return periods of 2, 5, 10, 25 and 50 years are introduced by taking into account GP parameters, which are estimated by fitting the GP distribution to empirical PDS distributions of DSL. A comparative study with those obtained in a previous paper, for the whole DSL series and the corresponding best distribution model (Pearson type III), shows that the differences of DSL for the different return periods keep within ±10 % in most of rain gauges. Moreover, a principal component analysis, PCA, is applied to the four first L-moments of the 267 rain gauges. Then, a regionalization in 11 groups is obtained after the clustering process. Finally, a regional frequency analysis is attempted, being possible to assign a GP parent distribution with different parameters to 7 out of the 11 groups.
CitationSerra, C., Lana, F.J., Burgueño, A., Martinez, M.D. Partial duration series distributions of the European dry spell lengths for the second half of the twentieth century. "Theoretical and applied climatology", 01 Gener 2016, vol. 23, núm. 1, p. 63-81.
URIhttp://hdl.handle.net/2117/85539
DOI10.1007/s00704-014-1337-2
ISSN0177-798X
Collections
Share: