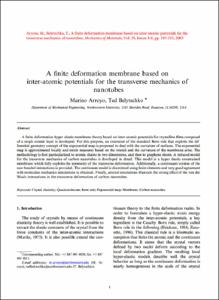 Belytschko, T.
Document typeArticle
Rights accessOpen Access
All rights reserved. This work is protected by the corresponding intellectual and industrial property rights. Without prejudice to any existing legal exemptions, reproduction, distribution, public communication or transformation of this work are prohibited without permission of the copyright holder
Abstract
A finite deformation hyper-elastic membrane theory based on inter-atomic potentials for crystalline films composed of a single atomic layer is developed. For this purpose, an extension of the standard Born rule that exploits the differential geometry concept of the exponential map is proposed to deal with the curvature of surfaces. The exponential map is approximated locally and strain measures based on the stretch and the curvature of the membrane arise. The methodology is first particularized to atomic chains in two dimensions, and then to graphene sheets. A reduced model for the transverse mechanics of carbon nanotubes is developed in detail. This model is a hyper-elastic constrained membrane which fully exploits the symmetry of the transverse deformation. Additionally, a continuum version of the non-bonded interactions is provided. The continuum model is discretized using finite elements and very good agreement with molecular mechanics simulations is obtained. Finally, several simulations illustrate the strong effect of the van der Waals interactions in the transverse deformation of carbon nanotubes.
CitationArroyo, M.; Belytschko, T. A finite deformation membrane based on inter-atomic potentials for the transverse mechanics of nanotubes. "Mechanics of materials", Març 2003, vol. 35, núm. 3-6, p. 193-215.
URIhttp://hdl.handle.net/2117/8551
DOI10.1016/S0167-6636(02)00270-3
ISSN0167-6636
Publisher versionhttps://www.sciencedirect.com/science/article/abs/pii/S0167663602002703?via%3Dihub
Collections
Share: