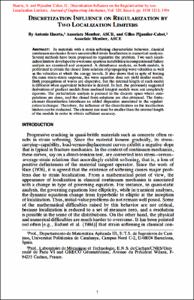 Pijaudier-Cabot, Gilles
Document typeArticle
Rights accessOpen Access
Abstract
In materials with a strain-softening characteristic behavior, classical continuum mechanics favors uncontrolled strain localization in numerical analyses. Several methods have been proposed to regularize the problem. Two such localization limiters developed to overcome spurious instabilities in computational failure analysis are examined and compared. A disturbance analysis, on both models, around an initially homogeneous state of strain is performed to obtain the closed-form solution of propagating wave velocities as well as the velocities at which the energy travels. It also shows that in spite of forcing the same stress-strain response on both models, the wave equation does not yield similar results. Both propagations of waves are dispersive, but the internal length of each model is different when equivalent behavior is desired. In fact, the previously suggested derivations of gradient models from nonlocal integral models were not completely rigorous. The localization modes and the influence of the internal length should be different in each limiter. The perturbation analysis is pursued in the discrete space where computations are done, and the closed form solutions for the dispersion equations are also obtained. The finite-element discretization introduces an added dispersion: the usual dispersion introduced by elliptic operators and another associated to the regularization technique. Therefore, the influence of the discretization on the localization limiters can be evaluated. The element size must be in the order of, or smaller than, the internal length of the models in order to obtain sufficient accuracy on the phase velocities of the propagating waves in transient analysis.
CitationHuerta, A.; Pijaudier, G. Discretization influence on regularization by two localization limiters. "Journal of engineering mechanics (ASCE)", Juny 1994, vol. 120, núm. 6, p. 1198-1218.
URIhttp://hdl.handle.net/2117/8543
DOI10.1061/(ASCE)0733-9399(1994)120:6(1198)
ISSN0733-9399
Publisher versionhttp://cedb.asce.org/cgi/WWWdisplay.cgi?88298
Collections
Share: