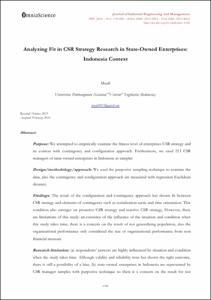 Show full item record
Muafi
Document typeArticle
PublisherOmniaScience
Rights accessOpen Access
Abstract
Purpose: We attempted to empirically examine the fitness level of enterprises CSR strategy and its context with contingency and configuration approach. Furthermore, we used 213 CSR managers of state-owned enterprises in Indonesia as samples Design/methodology/approach: We used the purposive sampling technique to examine the data, also the contingency and configuration approach are measured with regression Euclidean distance. Findings: The result of the configuration and contingency approach has shown fit between CSR strategy and elements of contingency such as socialization tactic and time orientation. This condition also emerges on proactive CSR strategy and reactive CSR strategy, However, there are limitations of this study: an existence of the influence of the situation and condition when this study takes time; there is a concern on the result of not generalizing population, also the organizational performance only considered the size of organizational performance from non financial measure. Research limitation: (a) respondents’ answers are highly influenced by situation and condition when the study takes time. Although validity and reliability tests has shown the right outcome, there is still a possibility of a bias, (b) state-owned enterprises in Indonesia are represented by CSR manager samples with purposive technique so there is a concern on the result for not generalizing population, (c) this research only used primary data through questionnaires. It would be better to combine both primary and secondary data for future researches, (d) organizational performance only considered the size of organizational performance from non financial measure. Originality/value: There is a methodological contribution in testing the fit of a relationship, both contingency and configuration are superior in terms of research method which used Euclidean distance, and used multivariate fit and bivariate fit linear regression. This research model used systematic approach by testing the fit of a relationship, using deviation from design ideal type for socialization tactic and time orientation or contingency variable that influences organizational performance, hence it could be acknowledged the value of the influence between ideal relationship from CSR strategy, socialization tactic and time orientation.
CitationMuafi. Analyzing fit in CSR strategy research in state-owned enterprises: Indonesia context. "Journal of Industrial Engineering and Management", Abril 2016, vol. 9, núm. 1, p. 179-206.
URIhttp://hdl.handle.net/2117/85365
DLB-28744-2008
ISSN2013-0953
Collections
Share: