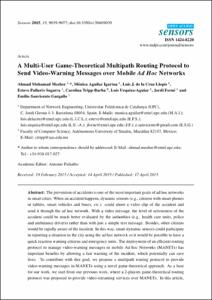 Except where otherwise noted, content on this work is licensed under a Creative Commons license : Attribution-NonCommercial-NoDerivs 3.0 Spain
Abstract
The prevention of accidents is one of the most important goals of ad hoc networks in smart cities. When an accident happens, dynamic sensors (e.g., citizens with smart phones or tablets, smart vehicles and buses, etc.) could shoot a video clip of the accident and send it through the ad hoc network. With a video message, the level of seriousness of the accident could be much better evaluated by the authorities (e.g., health care units, police and ambulance drivers) rather than with just a simple text message. Besides, other citizens would be rapidly aware of the incident. In this way, smart dynamic sensors could participate in reporting a situation in the city using the ad hoc network so it would be possible to have a quick reaction warning citizens and emergency units. The deployment of an efficient routing protocol to manage video-warning messages in mobile Ad hoc Networks (MANETs) has important benefits by allowing a fast warning of the incident, which potentially can save lives. To contribute with this goal, we propose a multipath routing protocol to provide video-warning messages in MANETs using a novel game-theoretical approach. As a base for our work, we start from our previous work, where a 2-players game-theoretical routing protocol was proposed to provide video-streaming services over MANETs. In this article, we further generalize the analysis made for a general number of N players in the MANET. Simulations have been carried out to show the benefits of our proposal, taking into account the mobility of the nodes and the presence of interfering traffic.Finally, we also have tested our approach in a vehicular ad hoc network as an incipient start point to develop a novel proposal specifically designed for VANETs.
CitationMezher, A., Aguilar, M., de la Cruz Llopis, Luis J., Pallares, E., Tripp, C., Urquiza, L., Fornés, J., Sanvicente, E. A multi-user game-theoretical multipath routing protocol to send video-warning messages over mobile ad hoc networks. "Sensors", 17 Abril 2015, vol. 15, núm. 4, p. 9039-9077.
URIhttp://hdl.handle.net/2117/85346
DOI10.3390/s150409039
ISSN1424-8220
Collections
Share: