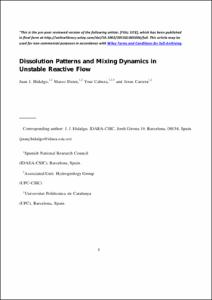 We study the fundamental problem of mixing and chemical reactions under a Rayleigh-Taylor-type hydrodynamic instability in a miscible two-fluid system. The dense fluid mixture, which is generated at the fluid-fluid interface, leads to the onset of a convective fingering instability and triggers a fast chemical dissolution reaction. Contrary to intuition, the dissolution pattern does not map out the finger geometry. Instead, it displays a dome-like, hierarchical structure that follows the path of the ascending fluid interface and the regions of maximum mixing. These mixing and reaction hot spots coincide with the flow stagnation points, at which the interfacial mixing layer is compressed and deformed. We show that the deformation of the boundary layer around the stagnation points controls the evolution of the global scalar dissipation and reaction rates and shapes the structure of the reacted zones. The persistent compression of the mixing layer explains the independence of the mixing rate from the Rayleigh number when convection dominates.
CitationHidalgo, J., Dentz, M., Cabeza, Y., Carrera, J. Dissolution patterns and mixing dynamics in unstable reactive flow. "Geophysical research letters", 16 Agost 2015, vol. 42, núm. 15, p. 6357-6364.
URIhttp://hdl.handle.net/2117/85342
DOI10.1002/2015GL065036
ISSN0094-8276
Publisher versionhttp://onlinelibrary.wiley.com/doi/10.1002/2015GL065036/full#references