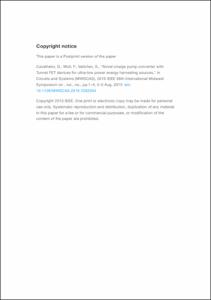 Compared to conventional technologies, the superior electrical characteristics of III-V Tunnel FET (TFET) devices can highly improve the process of energy harvesting conversion at ultra-low input voltage operation (sub-0.25V). In order to extend the input voltage/power range of operation in conventional charge pump topologies with TFET devices, it is of the major importance to reduce the band-to-band tunneling current when the transistor is under reverse bias conditions. This paper proposes a new charge pump topology with TFET devices that attenuate the reverse losses, thus improving the power conversion efficiency (PCE) in a broader range of input voltage values and output loads. It is shown by simulations that compared with the conventional gate cross-coupled charge pump and considering an input voltage of 640 mV, the proposed topology reduces the reverse losses from 19 % to 1 %, for an output current of 10 µA. For this case, the PCE increased from 63 % to 83 %.
CitationNunes, D., Moll, F., Valtchev, S. Novel charge pump converter with Tunnel FET devices for ultra-low power energy harvesting sources. A: IEEE International Midwest Symposium on Circuits and Systems. "Circuits and Systems (MWSCAS), 2015 IEEE 58th International Midwest Symposium on". Fort Collins: Institute of Electrical and Electronics Engineers (IEEE), 2015.
URIhttp://hdl.handle.net/2117/85311
DOI10.1109/MWSCAS.2015.7282034
Publisher versionhttp://ieeexplore.ieee.org/stamp/stamp.jsp?tp=&arnumber=7282034&isnumber=7281994