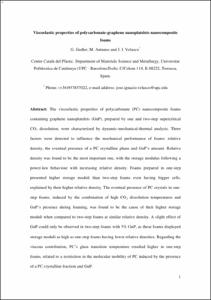 Except where otherwise noted, content on this work is licensed under a Creative Commons license : Attribution-NonCommercial-NoDerivs 3.0 Spain
Abstract
The viscoelastic properties of polycarbonate (PC) nanocomposite foams containing graphene nanoplatelets (GnP), prepared by one and two-step supercritical CO2 dissolution, were characterized by dynamic-mechanical-thermal analysis. Three factors were detected to influence the mechanical performance of foams: relative density, the eventual presence of a PC crystalline phase and GnP's amount. Relative density was found to be the most important one, with the storage modulus following a power-law behavior with increasing relative density. Foams prepared in one-step presented higher storage moduli than two-step foams even having bigger cells, explained by their higher relative density. The eventual presence of PC crystals in one-step foams, induced by the combination of high CO2 dissolution temperatures and GnP's presence during foaming, was found to be the cause of their higher storage moduli when compared to two-step foams at similar relative density. A slight effect of GnP could only be observed in two-step foams with 5% GnP, as these foams displayed storage moduli as high as one-step foams having lower relative densities. Regarding the viscous contribution, PC's glass transition temperature resulted higher in one-step foams, related to a restriction in the molecular mobility of PC induced by the presence of a PC crystalline fraction and GnP.
CitationGedler, G., De Sousa Pais, M., Velasco J.I. Viscoelastic properties of polycarbonate-graphene nanoplatelets nanocomposite foams. "Composites part B: engineering", Maig 2016, vol. 93, p. 143-152.
URIhttp://hdl.handle.net/2117/85303
DOI10.1016/j.compositesb.2016.03.032
ISSN1359-8368
Publisher versionhttp://www.sciencedirect.com/science/article/pii/S1359836816300567
Collections
Share: