Analysis of the vane test considering size and time effects 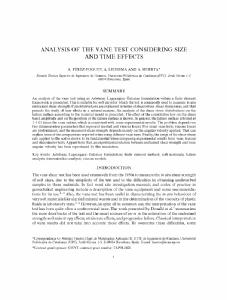 Document typeArticle
Rights accessOpen Access
Abstract
An analysis of the vane test using an Arbitrary Lagrangian-Eulerian formulation within a finite element framework is presented. This is suitable for soft clays for which the test is commonly used to measure in situ undrained shear strength. Constitutive laws are expressed in terms of shear stress-shear strain rates, and that permits the study of time effects in a natural manner. An analysis of the shear stress distributions on the failure surface according to the material model is presented. The effect of the constitutive law on the shear band amplitude and on the position of the failure surface is shown. In general, the failure surface is found at 1-1·01 times the vane radius, which is consistent with some experimental results. The problem depends on two dimensionless parameters that represent inertial and viscous forces. For usual vane tests, viscous forces are predominant, and the measured shear strength depends mainly on the angular velocity applied. That can explain some of the comparisons reported when using different vane sizes. Finally, the range of the shear strain rate applied to the soil is shown to be fundamental when comparing experimental results from vane, triaxial and viscosimeter tests. Appart from that, an experimental relation between undrained shear strength and vane angular velocity has been reproduced by this simulation.
CitationPérez, A.; Ledesma, A.; Huerta, A. Analysis of the vane test considering size and time effects. "International journal for numerical and analytical methods in geomechanics", Abril 1999, vol. 23, núm. 5, The definitive version is available at http://www3.interscience.wiley.com/journal/60500603/abstract, p. 383-412.
URIhttp://hdl.handle.net/2117/8525
ISSN0363-9061
Collections
Share: