Small-scale gravitational instabilities under the oceans: implications for the evolution of oceanic lithosphere and its expression in geophysical observables 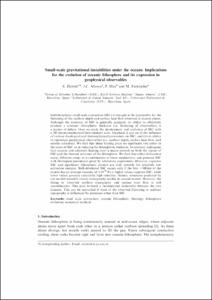 Sublithospheric small-scale convection (SSC) is thought to be responsible for the flattening of the seafloor depth and surface heat flow observed in mature plates. Although the existence of SSC is generally accepted, its ability to effectively produce a constant lithospheric thickness (i.e. flattening of observables) is a matter of debate. Here we study the development and evolution of SSC with a 2D thermomechanical finite-element code. Emphasis is put on (i) the influence of various rheological and thermophysical parameters on SSC, and (ii) its ability to reproduce geophysical observables (i.e. seafloor depth, surface heat flow, and seismic velocities). We find that shear heating plays no significant role either in the onset of SSC or in reducing the lithospheric thickness. In contrast, radiogenic heat sources and adiabatic heating exert a major control on both the vigour of SSC and the thermal structure of the lithosphere. We find that either dislocation creep, diffusion creep, or a combination of these mechanisms, can generate SSC with rheological parameters given by laboratory experiments. However, vigorous SSC and significant lithospheric erosion are only possible for relatively low activation energies. Well-developed SSC occurs only if the first ∼300 km of the mantle has an average viscosity of ≲1020 Pa s; higher values suppress SSC, while lower values generate unrealistic high velocities. Seismic structures predicted by our models resemble closely tomography studies in oceanic mantle. However, the fitting to observed seafloor topography and surface heat flow is still unsatisfactory. This puts forward a fundamental dichotomy between the two datasets. This can be reconciled if most of the observed flattening in seafloor topography is influenced by processes other than SSC.
CitationZlotnik, S. [et al.]. Small-scale gravitational instabilities under the oceans: implications for the evolution of oceanic lithosphere and its expression in geophysical observables. "Philosophical magazine", Octubre 2008, vol. 88, núm. 28-29, p. 3197-3217.
URIhttp://hdl.handle.net/2117/8518
DOI10.1080/14786430802464248
ISSN1478-6435
Publisher versionhttp://www.informaworld.com/smpp/content~db=all~content=a906939048~frm=titlelink