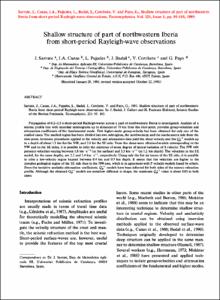 Badal, J
Corchete, V
Payo, G
Document typeArticle
Rights accessOpen Access
Abstract
Propagation of 0.2–2.5 s short-period Rayleigh-waves across a part of northwestern Iberia is investigated. Analysis of a seismic profile line with recorded seismograms up to distances of 70 km from the shot-point, provides group-velocities and attenuation coefficients of the fundamental mode. First higher-mode group-velocity has been obtained for only one of the studied cases. The studied region has been divided into two subrogions, the northwestern and the southeastern side from the shot-point. Inversion procedures applied to the velocity and attenuation data yield the shear velocity and the Q−1β models up to a depth of about 1.5 km for the NW, and 2.4 for the SE side. From the shear-wave obtained models corresponding to the NW and to the SE sides, it is possible to infer the existence of some degree of lateral variation of S velocity. The NW side presents velocities varying between 1.8 km · s−1 (at the surface) and 3.3 km · s−1 (at 1.2 km depth). The velocities in the SE model, for the same depths, are 2.2 and 3.4 km · s−1, respectively. Using only the fist six traces of the SE side, it is possible to infer a low-velocity region located between 0.4 km and 0.7 km depth. It seems that the velocities are higher in the complex geological region of the SE side than in the NW one, which is in agreement with P velocity models found by others. From the tentative anelastic attenuation coefficients, Q−1β models have been inferred for both sides of the seismic refraction profile. Although the obtained Q−1β models are somehow different in shape, the maximum Q−1β value is about 0.05 in both cases.
CitationSarrate, J. [et al.]. Shallow structure of part of northwestern Iberia from short-period Rayleigh-wave observations. "Tectonophysics", Abril 1993, vol. 221, núm. 1, p. 95-105.
URIhttp://hdl.handle.net/2117/8517
DOI10.1016/0040-1951(93)90030-N
ISSN0040-1951
Collections
Share: