A context-aware model to provide positioning in disaster relief scenarios 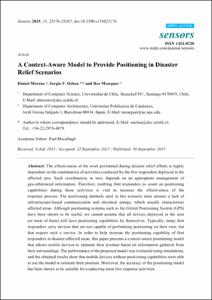 Document typeArticle
Rights accessOpen Access
ProjectCLOMMUNITY - A Community networking Cloud in a box (EC-FP7-317879)
CONFINE - Community Networks Testbed for the Future Internet (EC-FP7-288535)
Abstract
The effectiveness of the work performed during disaster relief efforts is highly dependent on the coordination of activities conducted by the first responders deployed in the affected area. Such coordination, in turn, depends on an appropriate management of geo-referenced information. Therefore, enabling first responders to count on positioning capabilities during these activities is vital to increase the effectiveness of the response process. The positioning methods used in this scenario must assume a lack of infrastructure-based communication and electrical energy, which usually characterizes affected areas. Although positioning systems such as the Global Positioning System (GPS) have been shown to be useful, we cannot assume that all devices deployed in the area (or most of them) will have positioning capabilities by themselves. Typically, many first responders carry devices that are not capable of performing positioning on their own, but that require such a service. In order to help increase the positioning capability of first responders in disaster-affected areas, this paper presents a context-aware positioning model that allows mobile devices to estimate their position based on information gathered from their surroundings. The performance of the proposed model was evaluated using simulations, and the obtained results show that mobile devices without positioning capabilities were able to use the model to estimate their position. Moreover, the accuracy of the positioning model has been shown to be suitable for conducting most first response activities.
CitationMoreno, D., Ochoa, Sergio F., Meseguer, R. A context-aware model to provide positioning in disaster relief scenarios. "Sensors", 01 Octubre 2015, vol. 15, núm. 10, p. 25176-25207.
URIhttp://hdl.handle.net/2117/85012
DOI10.3390/s151025176
ISSN1424-8220
Publisher versionhttp://www.mdpi.com/1424-8220/15/10/25176
Collections
Share: