Dynamics of Airflow in a Short Inhalation 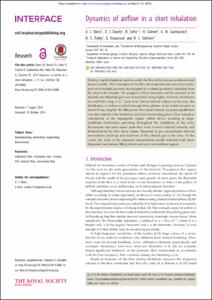 Dynamics of airflow in a short inhalation.pdf (2,970Mb)
Share:

Schroter, Robert
Document typeArticle
PublisherThe Royal Society
Rights accessOpen Access
Abstract
During a rapid inhalation, such as a sniff, the flowin the airways accelerates and decays quickly. The consequences for flow development and convective transport of an inhaled gas were investigated in a subject geometry extending from the nose to the bronchi. The progress of flow transition and the advance of an inhaled non-absorbed gas were determined using highly resolved simulations of a sniff 0.5 s long, 1 l s21 peak flow, 364 ml inhaled volume. In the nose, the distribution of airflow evolved through three phases: (i) an initial transient of about 50 ms, roughly the filling time for a nasal volume, (ii) quasi-equilibrium over themajority of the inhalation, and (iii) a terminating phase. Flow transition commenced in the supraglottic region within 20 ms, resulting in largeamplitude fluctuations persisting throughout the inhalation; in the nose, fluctuations that arose nearer peak flow were of much reduced intensity and diminished in the flow decay phase. Measures of gas concentration showed non-uniform build-up and wash-out of the inhaled gas in the nose. At the carina, the form of the temporal concentration profile reflected both shear dispersion and airway filling defects owing to recirculation regions.
CitationBates, Alister J. [et al.]. Dynamics of Airflow in a Short Inhalation. "Interface", 06 Gener 2015, vol. 12, núm. 102.
URIhttp://hdl.handle.net/2117/84951
DOI10.1098/rsif.2014.0880
ISSN1742-5662
Publisher versionhttp://rsif.royalsocietypublishing.org/content/12/102/20140880.article-info
Collections
Share: