An elastic plastic damage formulation for concrete: application to elementary and structural tests 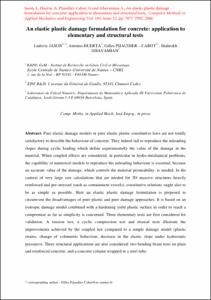 Pijaudier-Cabot, Gilles
Ghavamian, S
Tipus de documentArticle
Condicions d'accésAccés obert
Abstract
Pure elastic damage models or pure elastic plastic constitutive laws are not totally satisfactory to describe the behaviour of concrete. They indeed fail to reproduce the unloading slopes during cyclic loading which define experimentally the value of the damage in the material. When coupled effects are considered, in particular in hydro-mechanical problems, the capability of numerical models to reproduce the unloading behaviour is essential, because an accurate value of the damage, which controls the material permeability, is needed. In the context of very large size calculations that are needed for 3D massive structures heavily reinforced and pre-stressed (such as containment vessels), constitutive relations ought also to be as simple as possible. Here an elastic plastic damage formulation is proposed to circumvent the disadvantages of pure plastic and pure damage approaches. It is based on an isotropic damage model combined with a hardening yield plastic surface in order to reach a compromise as far as simplicity is concerned. Three elementary tests are first considered for validation. A tension test, a cyclic compression test and triaxial tests illustrate the improvements achieved by the coupled law compared to a simple damage model (plastic strains, change of volumetric behaviour, decrease in the elastic slope under hydrostatic pressures). Finally, one structural application is also considered: a concrete column wrapped in a steel tube.
CitacióJason, L. [et al.]. An elastic plastic damage formulation for concrete: application to elementary and structural tests. "Computer methods in applied mechanics and engineering", Novembre 2006, vol. 195, núm. 52, p. 7077-7092.
URIhttp://hdl.handle.net/2117/8495
DOI10.1016/j.cma.2005.04.017
ISSN0045-7825
Col·leccions
Comparteix: