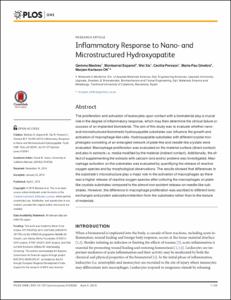 Except where otherwise noted, content on this work is licensed under a Creative Commons license : Attribution-NonCommercial-NoDerivs 3.0 Spain
ProjectGROWTH - GROWTH (EC-FP7-291795)
Abstract
The proliferation and activation of leukocytes upon contact with a biomaterial play a crucial role in the degree of inflammatory response, which may then determine the clinical failure or success of an implanted biomaterial. The aim of this study was to evaluate whether nano-and microstructured biomimetic hydroxyapatite substrates can influence the growth and activation of macrophage-like cells. Hydroxyapatite substrates with different crystal morphologies consisting of an entangled network of plate-like and needle-like crystals were evaluated. Macrophage proliferation was evaluated on the material surface (direct contact) and also in extracts i.e. media modified by the material (indirect contact). Additionally, the effect of supplementing the extracts with calcium ions and/or proteins was investigated. Macrophage activation on the substrates was evaluated by quantifying the release of reactive oxygen species and by morphological observations. The results showed that differences in the substrate's microstructure play a major role in the activation of macrophages as there was a higher release of reactive oxygen species after culturing the macrophages on plate-like crystals substrates compared to the almost non-existent release on needle-like substrates. However, the difference in macrophage proliferation was ascribed to different ionic exchanges and protein adsorption/retention from the substrates rather than to the texture of materials.
CitationMestres, G., Español, M., xia, W., Persson, C., Ginebra, M.P., Karlsson, M. Inflammatory response to nano- and microstructured hydroxyapatite. "PLoS one", 02 Abril 2015, vol. 10, núm. 4.
URIhttp://hdl.handle.net/2117/84946
DOI10.1371/journal.pone.0120381
ISSN1932-6203
Publisher versionhttp://journals.plos.org/plosone/article?id=10.1371/journal.pone.0120381
Collections
Share: