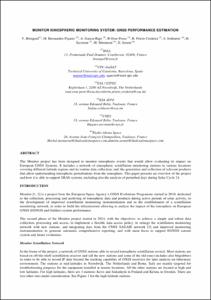 MONITOR is a project from the European Space Agency’s GNSS Evolutions Programme started in 2010, dedicated to the collection of data and products during active periods of solar activity for later understanding of the impact of ionospheric effects on EGNOS and Galileo system performance. In the frame of this project several tasks have been achieved, in particular the deployment of a network of scintillation receivers (Novatel + Septentrio + GISMO) mainly at low and high latitudes, the development of a real time Central Archiving and Processing Facility (CAPF) and the development of dedicated processors to generate user oriented outputs for TEC, scintillation, and space weather issues. This project, in its new phase started in 2014, is moving forward with an improved and updated scope, addressing in addition to general ionospheric monitoring, the generation of dedicated products and reports to EGNOS system evolution, international collaboration in related ionospheric topics including feasibility studies in Africa. The main new features are: an upgraded data archiving system providing improved accessibility, the integration of data from SAGAIE network from French Space Agency, CNES and the exploitation of its data for new products, new station deployment in regions of interest (mainly in West and Central Africa and in high latitudes in Europe), and the upgrade and development of new products allowing better analysis of geophysical conditions during periods of compromised system performance and service. As an example, the Along Arc TEC Rate (AATR index) is computed routinely, as it has proven to be a clear indicator of ionospheric activity that degrades SBAS system performance. In addition, Monitor already produces VTEC maps (obtained using various techniques and algorithms), several space weather indicators including solar flare detection, ROTI maps, indices related to the quality of measurements and scintillation analysis tools. This paper focuses on the relationship of an SBAS system (EGNOS, WAAS) to the ionosphere’s variability and will analyse in detail the ionospheric parameters leading to a decrease or compromise of system performance. Several case studies will highlight significant EGNOS events for this purpose. The paper will demonstrate how AATR is able to discriminate availability degradation due to ionospheric events from other effects. The ionosphere scintillation aspects and the last developments of the GISM model will also be addressed for this issue.
CitationBeniguel, Y., Hernandez, M., Garcia-Rigo, A., Orús, R., Prieto-Cerdeira, R., Schlueter, S., Secretan, H., Monnerat, M., Serant, D. MONITOR Ionospheric Monitoring System: GNSS performance estimation. A: European Navigation Conference. "ENC 2015 Proceedings". Bordeaux: 2015, p. 1-7.
URIhttp://hdl.handle.net/2117/84928
Publisher versionhttp://espace-ftp.cborg.info/1504ENC/fullpaper/FP_ENC-052.pdf