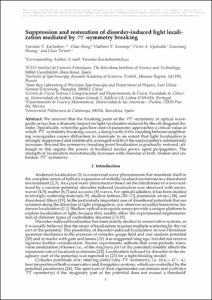 Except where otherwise noted, content on this work is licensed under a Creative Commons license : Attribution-NonCommercial-NoDerivs 3.0 Spain
Abstract
We uncover that the breaking point of the PT-symmetry in optical waveguide arrays has a dramatic impact on light localization induced by the off-diagonal disorder. Specifically, when the gain/loss control parameter approaches a critical value at which PT-symmetry breaking occurs, a fast growth of the coupling between neighboring waveguides causes diffraction to dominate to an extent that light localization is strongly suppressed and the statistically averaged width of the output pattern substantially increases. Beyond the symmetry-breaking point localization is gradually restored, although in this regime the power of localized modes grows upon propagation. The strength of localization monotonically increases with disorder at both broken and unbroken PT-symmetry. Our findings are supported by statistical analysis of parameters of stationary eigenmodes of disordered-symmetric waveguide arrays and by analysis of dynamical evolution of single-site excitations in such structures. Parity-time (PT)- symmetric waveguides feature real spectra despite the presence of gain and losses. A spectrum becomes complex at the symmetry-breaking point as the guide characteristics are changed. This paper reports on disorder-induced localization caused by off-diagonal disorder introduced into a PT-symmetric periodic waveguide array. Localization is suppressed near and restored far beyond the symmetry-breaking point. The phenomenon is explained by enhancement of the diffraction in the symmetry-breaking point.
CitationKartashov, Y.V., Hang, C., Konotop, V., Vysloukh, V.A., Huang , G., Torner, L. Suppression and restoration of disorder-induced light localization mediated by PT-symmetry breaking. "Laser and photonics reviews", 12 Gener 2016, vol. 10, p. 100-107.
URIhttp://hdl.handle.net/2117/84920
DOI10.1002/lpor.201500149
ISSN1863-8880
Publisher versionhttp://onlinelibrary.wiley.com/doi/10.1002/lpor.201500149/abstract
Collections
Share: