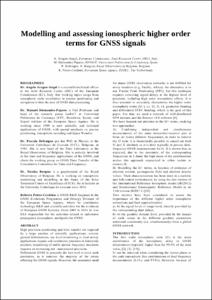 Except where otherwise noted, content on this work is licensed under a Creative Commons license : Attribution-NonCommercial-NoDerivs 3.0 Spain
Abstract
High precision positioning and time transfer are required by a large number of scientific applications: seismic ground deformations, sea level monitoring or land survey applications require sub-centimeter precision in kinematic position; monitoring of stable atomic frequency standards requires an increasing sub –nanosecond precision. Differential GNSS is presently the best tool to reach such precisions, as it removes the majority of the errors affecting the GNSS signals. However, the associated need for dense GNSS observation networks is not fulfilled for many locations (e.g. Pacific, Africa). An alternative is to use Precise Point Positioning (PPP), but this technique requires correcting signal delays at the highest level of precision, including high order ionospheric effects. It is thus essential to accurately characterize the higher order ionospheric terms (I2+), i.e. I2, I3, I4, geometric bending and differential STEC bending, which is the goal of this paper. For that, we used a network of well-distributed GPS stations, and the Bernese v5.0 software. We have focused our attention in the I2+ terms, studying two approaches: A) Combining independent and simultaneous measurements of the same transmitter-receiver pair at three (or more) different frequencies, in order to remove the I2 term: it is theoretically possible to cancel out both I1 and I2 similarly as it is done typically in precise dual-frequency GNSS measurements for I1. It is shown that, as expected, due to the proximity of the corresponding frequencies in L-band, the high noise of the combinations makes this approach unpractical to either isolate or remove I2. B) Modelling the I2+ terms, in function of estimates of electron content, geomagnetic field and electron density values. Their characterization has been done in a realistic and full-control environment, by using the last version of the International Reference Ionosphere model (IRI2012) and International Geomagnetic Reference Model in its 11th version (IGRF11). Two metrics have been considered to assess the importance of the different higher order ionospheric corrections and their approximations: a) At the signal level, or range level, directly provided by the corresponding slant delays. b) At the geodetic domain level, provided by the impact of such values in the different geodetic parameters estimated consistently (i.e. simultaneously) from a global GNSS network.
CitationAragón-Àngel, A., Hernandez, M., Defraigne, P., Bergeot, N., Prieto-Cerdeira, R. Modelling and assessing ionospheric higher order terms for GNSS signals. A: International Technical Meeting of the Satellite Division of the Institute of Navigation. "Proceedings of the 28th International Technical Meeting of The Satellite Division of the Institute of Navigation (ION GNSS+ 2015), 4-18 September, 2015, Tampa, Florida, EUA". Tampa, Florida: 2015, p. 3511-3524.
URIhttp://hdl.handle.net/2117/84847
Collections
Share: