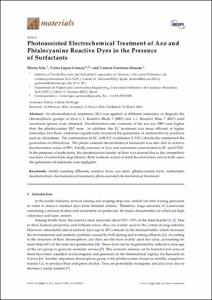 Document typeArticle
Rights accessOpen Access
Abstract
An electrochemical treatment (EC) was applied at different intensities to degrade the chromophoric groups of dyes C.I. Reactive Black 5 (RB5) and C.I. Reactive Blue 7 (Rb7) until uncolored species were obtained. Decolorization rate constants of the azo dye RB5 were higher than the phtalocyanine Rb7 ones. In addition, the EC treatment was more efficient at higher intensities, but these conditions significantly increased the generation of undesirable by-products such as chloroform. The combination of EC with UV irradiation (UVEC) drastically minimized the generation of chloroform. The photo-assisted electrochemical treatment was also able to achieve decolorization values of 99%. Finally, mixtures of dyes and surfactants were treated by EC and UVEC. In the presence of surfactants, the decolorization kinetic of dyes was slowed due to the competitive reactions of surfactants degradation. Both methods achieved total decolorization and in both cases, the generation of haloforms was negligible.
CitationSala, M., Lopez, V., Gutierrez-Bouzán, C. Photoassisted electrochemical treatment of azo and phtalocyanine reactive dyes in the presence of surfactants. "Materials", 18 Març 2016, vol. 9, núm. 3.
URIhttp://hdl.handle.net/2117/84798
DOI10.3390/ma9030211
ISSN1996-1944
Publisher versionhttp://www.mdpi.com/1996-1944/9/3/211
Collections
Share: