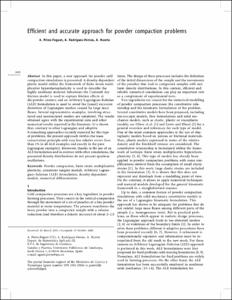 Document typeArticle
Rights accessOpen Access
All rights reserved. This work is protected by the corresponding intellectual and industrial property rights. Without prejudice to any existing legal exemptions, reproduction, distribution, public communication or transformation of this work are prohibited without permission of the copyright holder
Abstract
In this paper, a new approach for powder cold compaction simulations is presented. A density-dependent plastic model within the framework of finite strain multiplicative hyperelastoplasticity is used to describe the highly nonlinear material behaviour; the Coulomb dry friction model is used to capture friction effects at die-powder contact; and an Arbitrary Lagrangian–Eulerian (ALE) formulation is used to avoid the (usual) excessive distortion of Lagrangian meshes caused by large mass fluxes. Several representative examples, involving structured and unstructured meshes are simulated. The results obtained agree with the experimental data and other numerical results reported in the literature. It is shown that, contrary to other Lagrangian and adaptive h-remeshing approaches recently reported for this type of problems, the present approach verifies the mass conservation principle with very low relative errors (less than 1% in all ALE examples and exactly in the pure Lagrangian examples). Moreover, thanks to the use of an ALE formulation and in contrast with other simulations, the presented density distributions do not present spurious oscillations.
CitationPérez, A.; Rodríguez, A.; Huerta, A. Efficient and accurate approach for powder compaction problems. "Computational mechanics", Febrer 2003, vol. 30, núm. 3, The original publication is available at http://www.springerlink.com/content/0byq69508x0r3k26/?p=fb7ad26e043b41e4b29562dda8dd0191&pi=0, p. 220-234.
URIhttp://hdl.handle.net/2117/8478
DOI10.1007/s00466-002-0381-4
ISSN0178-7675
Collections
Share: